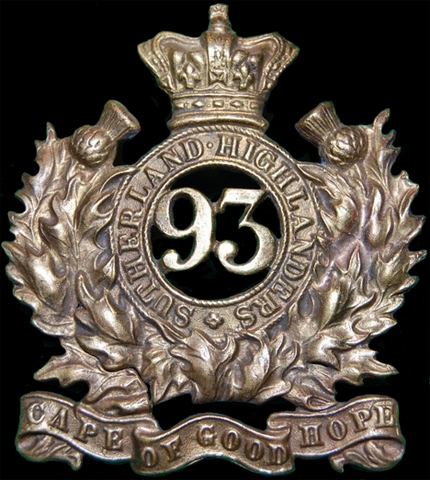 The regiment arrived at Stirling Castle in October 1848 and provided a Guard of Honour for Queen Victoria on her visit to Glasgow in August 1849. It embarked for the Crimea for service in the Crimean War in February 1854. As part of Brigadier-General Colin Campbell’s Highland Brigade, it took part in the Battle of Alma in September 1854. On 25 October 1854, it was stationed outside the British-controlled port of Balaklava as part of its very thin defences. The Russian Army sent a large force to attack Balaklava, precipitating the Battle of Balaclava.

The Russian threat was countered in part by the charge of General James Scarlett’s Heavy Cavalry Brigade but the rest of the Russian force headed straight for the 93th Regiment of Foot.

Campbell told the men of the 93th Regiment of Foot as he rode down the line: “There is no retreat from here, men…you must die where you stand.” One of the troops, John Scott, responded: “Aye, Sir Colin. An needs be, we’ll do that.” As the younger soldiers moved forward for a bayonet charge, Campbell called out: “93rd, 93rd, damn all that eagerness!” The Times journalist W.H.Russell commenting on the action reported:

The Russians dash at the Highlanders. The ground flies beneath their horses’ feet; gathering speed at every stride, they dash on towards that thin red streak topped with a line of steel.

This led to the regiment’s nickname: “The Thin Red Line”. The historical author, Thomas Carter, wrote:

Advancing in great strength, supported by artillery, the Russian cavalry appeared on the scene. One portion of them assailed the front and right flank of the 93th., but were instantly driven back by the vigorous and steady fire of that distinguished regiment, under Lieutenant-Colonel [William Bernard] Ainslie.

View more
Shopping Cart
We use cookies on our website to give you the most relevant experience by remembering your preferences and repeat visits. By clicking “Accept All”, you consent to the use of ALL the cookies. However, you may visit "Cookie Settings" to provide a controlled consent.
Cookie SettingsAccept All
Manage consent

This website uses cookies to improve your experience while you navigate through the website. Out of these, the cookies that are categorized as necessary are stored on your browser as they are essential for the working of basic functionalities of the website. We also use third-party cookies that help us analyze and understand how you use this website. These cookies will be stored in your browser only with your consent. You also have the option to opt-out of these cookies. But opting out of some of these cookies may affect your browsing experience.
Necessary Sempre abilitato
Necessary cookies are absolutely essential for the website to function properly. These cookies ensure basic functionalities and security features of the website, anonymously.
Functional
Functional cookies help to perform certain functionalities like sharing the content of the website on social media platforms, collect feedbacks, and other third-party features.
Performance
Performance cookies are used to understand and analyze the key performance indexes of the website which helps in delivering a better user experience for the visitors.
Analytics
Analytical cookies are used to understand how visitors interact with the website. These cookies help provide information on metrics the number of visitors, bounce rate, traffic source, etc.
Advertisement
Advertisement cookies are used to provide visitors with relevant ads and marketing campaigns. These cookies track visitors across websites and collect information to provide customized ads.
Others
Other uncategorized cookies are those that are being analyzed and have not been classified into a category as yet.
ACCETTA E SALVA