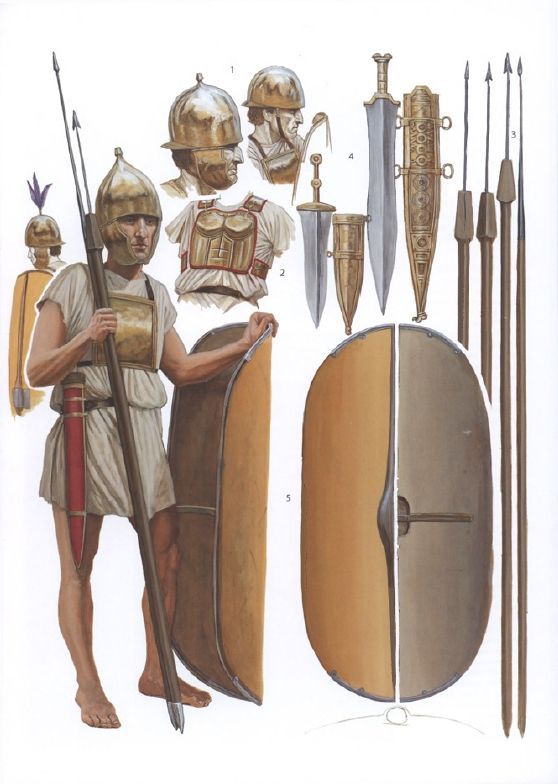 Soldiers who formed the first line of the Roman deployment, the Hastati, initially equipped with “Hasta”, were followed into battle by the more experienced and better equipped lines of Principes and Triarii, and were preceded by skirmishers, called “Velites”.

The Hastati, just like the Principes and the Triarii, were required to wear full armor, called a panoply, which consisted of:

-An oval shield about two Roman feet wide and four long (one Roman foot corresponds to about 27.5 cm). The oval shield was adopted towards the end of the 5th century. B.C. when the first soldiers were paid a salary by abandoning the archaic round shield called “clipeus”.

-A sword hanging on the right side which after the Second Punic War corresponded to the infamous and fearsome “gladius hispaniensis”, equipped with an exceptionally effective tip, capable, moreover, of striking with cutting violence on both sides as it is built with a blade extremely robust.

-Two “pilum” the famous javelin to be thrown to disrupt the enemy front rows, one very robust, with a round or square shape and the other thinner, similar to a medium-length hunting spear.

-A bronze helmet with 3 red or black feathers, placed in such a way as to make the enemy look like the tallest and most fearsome Roman infantry.

-The leggings to protect the lower limbs from the knee to the ankle.

-A bronze plate placed in the center of the chest, called “pectoral”, even if the wealthiest could afford a mesh armor called “lorica hamata”.

Hastati, use in battle:

Ennio in his “Annales” writes: “the Hastati launch the rods: a rain of iron is unleashed”. Near the enemy at a distance of about 15 paces the Hastati threw their javelins to create disorder in the first enemy rows with which they then quickly reached a violent hand-to-hand, tightly closing the ranks. Let’s now see how Tito Livio describes the first impact:

“When the army had assumed this lineup, the hastati first of all began the fight. If the hastati were unable to defeat the enemy, they retreated at a slow pace and the principes welcomed them in the intervals between them. […] the triarii were placed under the banners, with the left leg extended and the shields resting on the shoulder and the rods stuck in the ground, with the point pointing upwards, as if they were a palisade … If even the principes had fought with little success, they retreated from the front line to the triarii. “.

The Triarii at that point welcomed the soldiers who withdrew and threw themselves on the enemy. It is worth noting the difference between Hastati and Principes and Triarii, the first two lines were in fact constituted for the attack, while the last, despite being composed of veteran legionaries of great experience were used for defense, in essence they were the last hope. to maintain the position, and avoid the breakdown of the entire array.

Of the three infantry lines, that of the Hastati was made up of the younger boys and therefore less gifted from an economic point of view, which determined their entry into battle before the other departments.

Around the middle of the 4th century BC, during the Latin War, manipulative training was used within the legion, which in turn was divided into three different ranks:

the first consisted of the hastati in formation of fifteen maniples (60 infantry each) as well as 20 lightly armed infantrymen (equipped with spears or javelins, not instead of shields), called “leves”
the second was made up of more mature armed men, the principes.
These first two rows (made up of 30 handpieces) were called “Antepilans”

the third group was made up of fifteen other “orders”, each made up of 3 maniples (the first from Triarii, the second from Rorarii and the third from Accensi), each made up of 60 armed men.
At the beginning of the Second Punic War (218-202 BC). The legionaries were divided into four different categories, based on social class, equipment and age:

the first to be enlisted were the Velites in number of 1,200 (made up of the poorest and youngest Romans).
followed by the hastati, whose wealth and age were slightly higher, in number of 1,200.
Then came the principes, always enlisted in number of 1,200.
and finally there were the triarii the oldest. enrolled in number of 600.
About a century later Gaius Marius reformed the entire Roman war machine, abolished the difference between hastati, princes and triari by changing the legion manipulate into the legionary cohort and to all soldiers he gave the same equipment and for all the same throwing weapon, the pilum .

View more
Shopping Cart
We use cookies on our website to give you the most relevant experience by remembering your preferences and repeat visits. By clicking “Accept All”, you consent to the use of ALL the cookies. However, you may visit "Cookie Settings" to provide a controlled consent.
Cookie SettingsAccept All
Manage consent

This website uses cookies to improve your experience while you navigate through the website. Out of these, the cookies that are categorized as necessary are stored on your browser as they are essential for the working of basic functionalities of the website. We also use third-party cookies that help us analyze and understand how you use this website. These cookies will be stored in your browser only with your consent. You also have the option to opt-out of these cookies. But opting out of some of these cookies may affect your browsing experience.
Necessary Sempre abilitato
Necessary cookies are absolutely essential for the website to function properly. These cookies ensure basic functionalities and security features of the website, anonymously.
Functional
Functional cookies help to perform certain functionalities like sharing the content of the website on social media platforms, collect feedbacks, and other third-party features.
Performance
Performance cookies are used to understand and analyze the key performance indexes of the website which helps in delivering a better user experience for the visitors.
Analytics
Analytical cookies are used to understand how visitors interact with the website. These cookies help provide information on metrics the number of visitors, bounce rate, traffic source, etc.
Advertisement
Advertisement cookies are used to provide visitors with relevant ads and marketing campaigns. These cookies track visitors across websites and collect information to provide customized ads.
Others
Other uncategorized cookies are those that are being analyzed and have not been classified into a category as yet.
ACCETTA E SALVA